Originally featured on the V&A blog, Dawn Hoskin, assistant curator at the V&A speaks about her experiences... Last week, my LGBTQ Co-Chair Zorian Clayton and I had the pleasure of meeting up with Bird la Bird and her friend Michael Atchmann in the Museum, to chat about plans for an exciting event we have coming up in November. Sunday 22nd November to be precise – so note it in your diaries now!! Its current title is ‘An Armchair tour of the ‘Queer people’s knick knack emporium’ – if that doesn't pique your curiosity I'm not sure what will! 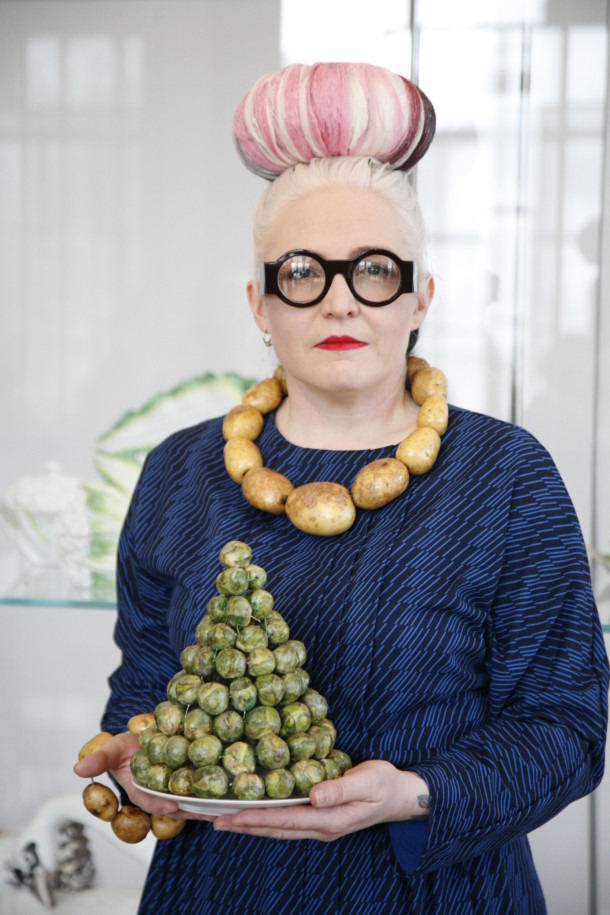 Some of you may remember Bird from previous LGBTQ events in the Museum, including her ‘Swoosh Around the V&A’ in February 2014 where she memorably renamed the Museum as the ‘Queer people’s knick knack emporium’. Handily armed with a megaphone to address the 100+ crowd, Bird took us for a flounce around the Museum, covering a range of subjects, including Tipu’s Tiger and theatrical costume.

That month also saw Bird grace us with her presence in the guise of Birdie Slipware OBE ‘the enfant terrible of clay’ – resplendent with costume and props by Lucas McKenna. With theorists of kitsch, Professor Ruth Holliday and Dr Tracy Potts, Bird explored themes of beauty, camp and taste via some of the extraordinary objects in the temporary display 'Deception: Ceramics and Imitation'. We are currently working with Bird, developing an event that will be part of Being Human – the UK’s only national festival dedicated to demonstrating the breadth, diversity and vitality of the humanities.

The festival is led by the School of Advanced Study, University of London, in partnership with the Arts & Humanities Research Council (AHRC), the British Academy and the Wellcome Trust – four organisations dedicated to the promotion of research in the arts, humanities and social sciences. To get a sense of what a wide variety of subjects the festival covers, before this year’s programme is officially announced, you can see last year’s listings here (I wish I’d been able to see Cracking the Crinoline and Romancing the Gibbet!).

Having been able to see proofs of this year’s festival brochure, I can say that our event will be just one of over two hundred enticing things across the country. Other events already taking shape for the festival include a ‘Shanty mob’ pub crawl around Liverpool, bus stop poetry readings in Bristol, a ‘zombie walk’ around Mary Shelley’s Dundee! … But back to Bird and Michael (and a cream tea!) in the Poynter Room of the Museum cafe. 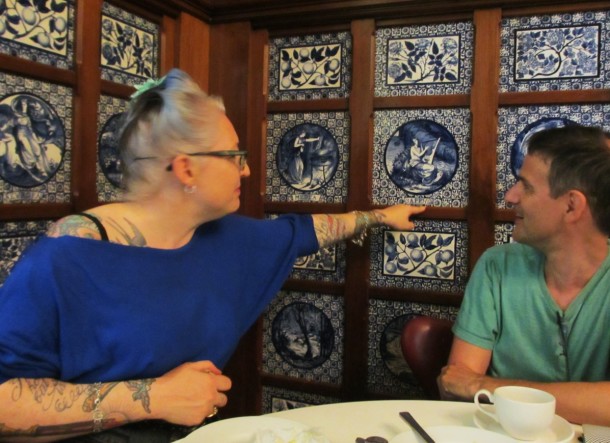 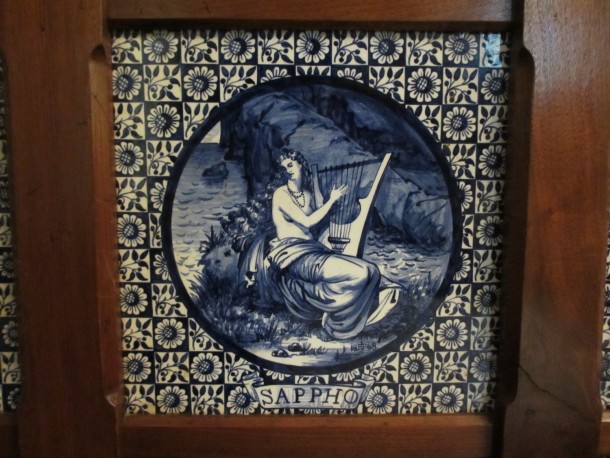 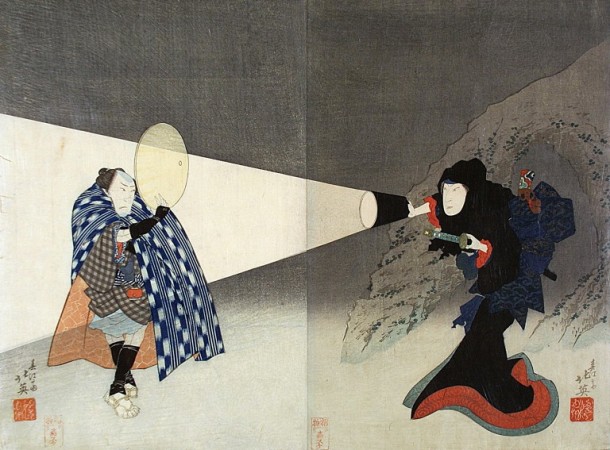 Given Bird’s interest in the intersections between gender, sexuality and class, this was an apt setting for discussions. Originally called the Grill Room, in the 1860s visitors could come for breakfast when the Museum opened at 9am and watch the cook prepare it on the stove. Fred Hill, a catering contractor from the Oval, offered a long menu divided according to social standing – meaning that there were first-class and second-class menus.

The room was designed by Edward Poynter, with a scheme centered on blue Dutch tiles which were painted by a special tile-painting class for ladies at the Schools of Design. In 1860s society, it was unusual for women to train professionally and so for them to be engaged in such a public a commission was a very forward-looking and bold move. Bird was particularly pleased to find a depiction of Sappho on a tile by our table! With the funding approved, the date set, a tempting title and the (rather capacious)  Lecture Theatre booked, it was time to revisit our early plans and for Bird to update us on where her research has been taking her.

Bird is particularly interested and committed to making the event to be accessible on a number of levels and for elements of the content to be available to as wide an audience as possible after the event. Michael is an Audio Describer and joined us to offer guidance and advice on how best to approach using Audio Description as one way of doing this. We’re also making arrangements for sign language too. Of course we don’t want to give too much away, so I will just teasingly say that discussion was enthusiastic, entertaining and revealing, with topics including the Museum’s facade, Simeon Solomon, Pre-Modern Asia, Kabuki, Kama Sutra, and ‘rabbit gods’!

Title: Assistant Curator at the V&A in the Furniture, Textiles & Fashion department

I am an Assistant Curator at the V&A working on the development of the new Europe 1600-1800 Galleries. My interests are wide-ranging but subjects I have particularly enjoyed exploring for this project include: European depictions of Africa and Africans; Dutch domestic interiors; early ballooning; the gambling halls of 18th-century Venice; the fashion for singeries (depictions of monkeys apeing human behaviour!); wig-making and hairdressing.

My 'favourite' object going into the new Europe Galleries changes on an almost daily basis ... I am also Co-Chair of the V&A's LGBTQ (Lesbian, Gay, Bisexual, Transgender, Queer) Group.

An event organised by Out in the Museum

This is the section for the V&A’s LGBTQ (Lesbian, Gay, Bisexual, Transgender, Queer) Working Group. We are Museum staff with an interest in using the collections to explore issues of gender, sexuality and identity. Through research, discussion and public programming we aim to open up the diverse histories of objects and encourage consideration of LGBTQ subjects. We organise a range of LGBTQ-focused events and activities throughout the year, including gallery talks, film screenings and artist performances.

‘Birdie Slipware OBE the enfant terrible of clay’ © Martin LeSanto-Smith 2014 Bird la Bird and Michael in the cafe: Pointing out that we were keeping company in with Sappho © Dawn Hoskin Sappho tile in the Poynter Room © Dawn Hoskin The Kabuki Actors Iwai Shijaku I and Bando Jutaro. Woodblock print by Shunbaisai Hokuei. Japan, 1832. V&A E.3873-1916